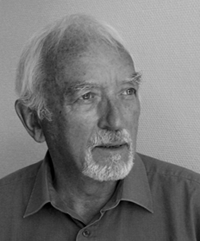 Pierre-Alain Jaffrennou was born in 1939 in Besançon. He studied pure and applied mathematics, earth sciences, celestial mechanics, data logic and analysis up to doctorate level in Strasbourg, Besançon and Lyon. He also studied music, after which he attended Pierre Schaeffer's electroacoustic music classes at the Conservatoire National Supérieur de Musique in Paris. From 1963 to 1967 he was in charge of music at La Comédie in Besançon. After completing his musical studies, between 1971 and 1977, he was a researcher at the Groupe de Recherche Musicale – ORTF – INA, where, with Francis Regnier, he founded a laboratory for scientific research on computer-assisted composition, working on the synthesis and processing of sound. In 1981, he and James Giroudon founded Grame, an association of composers and researchers in the field of contemporary music which was supported by the Ministry of Culture's music, dance, theatre and performance section (DMDTS), and which became an official Centre National de Création Musicale in 1996. Up to 1985, Pierre-Alain Jaffrennou concentrated on the setting up and supervision of Grame's laboratory for scientific research on computroup's work on representation, modelling and communication in architecture.

His musical works cover a broad field: electroacoustic music, the use of electronics, and purely instrumental music. His output is strongly marked by his interest in the relationship between art and science, in particular the contribution of computing to the process of musical composition. He is also interested in the spatialisation and staging of music. Since 1987, when the Babylon International Festival was inaugurated, he has been planning and putting on major musical events, most often in the open air, with large numbers of instrumentalists, lighting schemes, giant images and special effects.